Home » »Unlabelled » Intruders Break Into 83-Year-Old Man's Home; His Call To 911 Has The Internet In Tears Laughing

Intruders Break Into 83-Year-Old Man's Home; His Call To 911 Has The Internet In Tears Laughing 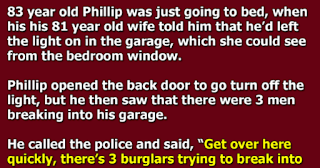 The police should have known that he might be older, but he’s not any slower!

83 year old Phillip was just going to bed, when his his 81 year old wife told him that he’d left the light on in the garage, which she could see from the bedroom window.

Phillip opened the back door to go turn off the light, but he then saw that there were 3 men breaking into his garage.

He called the police and said, “Get over here quickly, there’s 3 burglars trying to break into my garage on Maple Drive!”

The dispatcher replied, “I see, sir. Is your garage detached from your house?”

He said, “Yes, but never mind that, these bastards are breaking in and stealing from me!”

The police dispatcher said, “All patrols are busy. You should lock your doors and stay indoors. An officer will be along when one is available.”

He hung up the phone and counted to 30.

Then he called the police again. “Hello, I just called you a few seconds ago because there were people stealing things from my garage. Well, you don’t have to worry about them anymore, because I just shot them,” and he hung up.

Within five minutes, six police cars, a SWAT team, a helicopter, a paramedic, and an ambulance showed up at the old man’s residence and caught the burglars red-handed.

One of the police officers said to Phillip, “I thought you said that you’d shot them!”

Phillip replied, “I thought you said there was nobody available!”

Don’t try this at home, Folks!