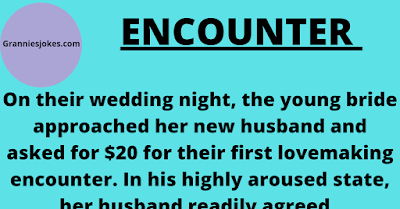 On their wedding night, the young bride approached her new husband and asked for $20 for their first lovemaking encounter. In his highly aroused state, her husband readily agreed.

This scenario was repeated each time they made love, for the next 30 years, with him thinking that it was a cute way for her to afford new clothes and other incidentals that she needed.

Arriving home around noon one day, she was surprised to find her husband in a very drunken state.

Over the next few minutes, he explained that his company had gone through a process of corporate downsizing, and he had been let go - It was unlikely that at the age of 55, he'd be able to find another position that paid anywhere near what he'd been earning, and therefore, they were financially ruined.

Calmly, his wife handed him a bank book which showed thirty years of deposits and interest totaling nearly $1 million.

Then, she showed him stock certificates issued by the bank which were worth over $2 million, and informed him that they were the largest stockholders in the bank.

She explained that for 30 years, she had charged him for sex and these holdings were the results of her savings and investments.

Faced with evidence of cash and investments worth over $3 million, her husband was so astounded he could barely speak, but finally he found his voice and blurted out, "If I'd had any idea what you were doing, I would have given you all my business!".

You know, sometimes, men just don't know when to keep their mouths shut.