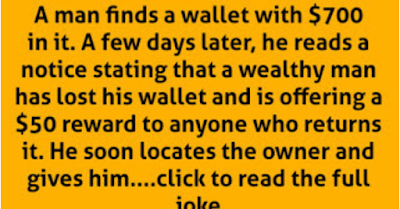 A man finds a wallet with $700 in it. A few days later, he reads a notice stating that a wealthy man has lost his wallet and is offering a $50 reward to anyone who returns it.

He soon locates the owner and gives him the wallet, and the rich man counts the money and says, “I see you have already taken your reward.”

The poor man responds, “What are you talking about?” The wealthy man continues, “This wallet had $750 in it when I lost it.”

The two men begin arguing, and eventually they go to court to sort out their differences.

Both men present their case, the poor man first, then the wealthy man who concludes by saying, “Your Honor, I trust you believe me.”

The Judge says, “Of course.” The rich man smiles, and the poor man is devastated.

Then the Judge takes the wallet out of the wealthy man’s hands and gives it to the poor man who found it. “What are you doing?” the rich man yells angrily.

The Judge responds, “You are, of course, an honest man, and if you say that your missing wallet had $750 in it, I’m sure it did – but if the man who found this wallet is a liar and a thief, he wouldn’t have returned it at all, which means that this wallet must belong to somebody else.

If that man steps forward, he’ll get the money – otherwise, it stays with the man who found it.”

“What about my money?” the rich man asks.

“Well, we’ll just have to wait until somebody finds your wallet with the $750 in it.
Article plus récent Article plus ancien